A delicious, retro classic. Perfect for feeding a crowd after a meal, this chocolate sponge pudding is sure to delight with it’s rich, chocolate flavour. Serve with hazelnut custard or ice cream.

I often find myself day dreaming about food. I used to think everyone did this (but apparently not?!), and it was during a particularly chocolate filled thought that this recipe came to mind. When I was a child, Cadbury’s steamed chocolate pudding used to be a real treat. Not because they were anything special, but it felt like a treat as they were one of the few puddings we ate that were not homemade.

Sadly, but expectedly, Cadbury’s steamed chocolate puddings contain rather a lot of dairy goodness, and so it has been a really, really long time since I’ve had one. But I knew that steamed sponge puddings were not meant to be that hard to make… so I thought I really should give it a go. I’m so glad I did; not only was the recipe an absolute triumph, it also inspired the Hazelnut Custard recipe which I posted two weeks ago, which has become a real favourite in our house.

The hardest thing about this pudding, honestly, was tying up the handle on the pudding basin. If you haven’t got a pudding basin, you can use any heat proof dish – the reason it’s good to use a basin is they have a lip round the top, which is ideal for tying the string round it. My handle turned into some engineered feat of brilliance (read: a lot of unnecessary knots caused by string cut too short!) but worked none the less, and made getting the pudding out of the pot a lot easier!

If you can handle making the handle, you’re sorted. This is a mix it and go recipe, where all the ingredients get put into a bowl and whizzed together. It would be perfect to make for pudding after a roast or other big family meal. It has universal appeal (who doesn’t love a bit of chocolate?!) and can calmly cook away as you get on with other things.

And for such a simple recipe, the results are tremendous. Rich and dense chocolate sponge, with a decadent and thick chocolate sauce dripping over the top – an ever so slightly more grown up version of the Cadbury’s favourite. The pudding is perfect served with this hazelnut custard, but would work just as well with ice cream. Along with the custard, this is sure to be a repeated recipe in our house! 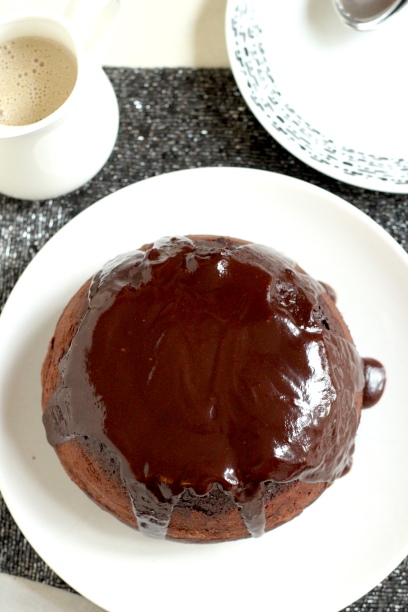 Use a 2 pint pudding basin, or other heatproof dish.

NB: If you have any left overs, simply warm through in the microwave in 15 second bursts.