Easter is most certainly on its way; even at Christmas you do not see such an abundance of chocolate in the shops! As well as chocolate there are fluffy baby chicks and pastel table decorations aplenty. But nothing says Easter to me as much as the piles and piles of Hot Cross Buns sold everywhere, as these still remain one of the few foods that you can’t buy all year round.

I haven’t eaten a shop bought Hot Cross Bun for a long time, not being able to eat the butter they are usually full of, so this year I thought I would tackle making them from scratch – and what a great result! I’m not going to lie… they take quite a long time and a lot of organisation but it is so worth the effort. This recipe suggests proving the dough overnight which means that if you want to eat them for breakfast on a Sunday (before midday!), you’ll start the dough on Friday night and bake them on the Saturday. The effort is really worth it though; the dough becomes light yet chewy, and the spices have time to permeate the dough ensuring their flavour stands out against the sweet fruits.

These Hot Cross Buns are a mixture of the traditional and the new; more fruity than usual with cranberries, apples and sultanas, and very aromatic with orange zest and mixed spice instead of just cinnamon. You can easily play around with these flavours and add or take away as you wish – for example, add ground cardamon instead of mixed spice, or change the flavours all together and replace with chocolate, cranberry, cinnamon and ginger for a twist.

After the effort and time of baking these, serve them on a beautifully decorated table (look here for a quick and simple idea, ideal for Easter), just warmed through in the oven, split in half and lightly spread with dairy free butter. In all honesty, who could imagine a better Easter breakfast than that? It might just make you wish we could eat these all year round… 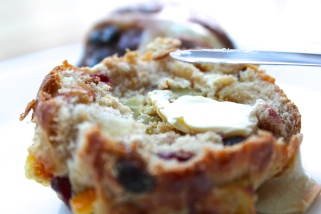 This recipe is adapted from Paul Hollywood’s ‘How To Bake’. Makes 15 Hot Cross Buns, takes 2 hours plus proving, resting, baking and cooling time. For the buns: